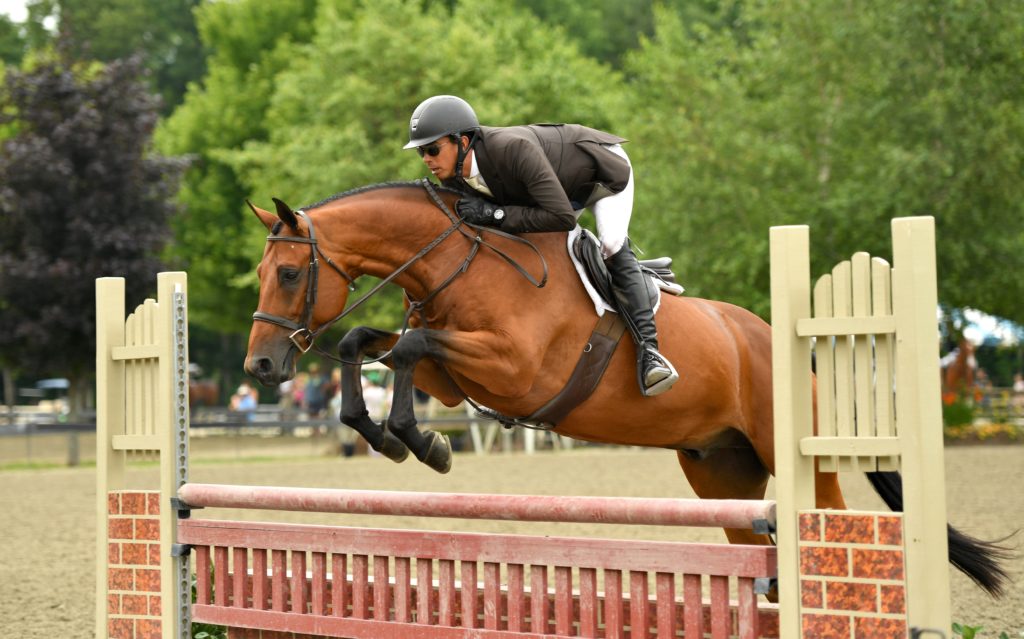 Course designer Gerry Briggs of Smyrna, TN, designed the derby track, which spanned two competition rings and utilized both hunter-style fences as well as traditional derby jumps. From an original starting field of 40 entries, the top 12 horse-rider combinations in the standings following the opening round judged by Marylisa Leffler of Brookeville, MD, returned for the handy round. Syquia and Sandro Rouge, owned by River Run Farm, received a score of 84 in the opening round, and returned to earn the handy round’s highest score of 86. With a total of 170, Syquia and the eight-year-old Belgian Warmblood gelding sired by Couleur Rouge earned the win.

“I’m ecstatic!” said Syquia, 42, who operates Eurasia, Inc. in Millbrook, NY, and Wellington, FL. “I think this class is such a great experience. A real challenge for some of these horses that we may want to do international derbies with in the future is the length of the course. It takes a lot of concentration to do 12 obstacles and then come back an hour or two hours later and jump another ten. I think that’s something that is very difficult, and this gives them really good experience.”

Amanda Steege of Ocala, FL, qualified two horses for the handy round, placing second riding Maitre D’ with scores of 82.5 and 85 for a total of 167.5 and fifth aboard Surreal after earning 81 and 83 for a final score of 164.

Having enjoyed a second-place finish during week two, Cassandra Orpen of Westport, CT, remained consistent to place third with scores of 82 and 83.75 for a total of 165.75 riding Major Key. Jennifer Wright of Coscob, CT, rode Zapata to a fourth-place finish on scores of 81.5 and 83.5 for a 165 total, also earning the high-point amateur award.

Sydney Degrazia, 15, of Rochester, NY, was presented as the high-point junior competitor after finishing sixth with Reveille Z.

Of his winning mount Sandro Rouge, who he just began riding this spring, Syquia noted, “I was really impressed with this horse. I had never ridden him in a derby environment, but he rose to the occasion. He’s a spectacular jumper and he has proven here to be brave. I think I have a good rapport with him, so I’m looking forward to the future with him.”

Syquia won the $15,000 Hunter Derby during the final week of the 2012 Vermont Summer Festival but has rarely been seen competing in the weekly feature since.

“I haven’t had any horses in the derbies recently, so it was fun to be able get back in the ring,” said Syquia. “I really enjoy going to shows run by Billy Glass, and appreciate what he does. We go to a lot of really big shows and you can get lost in the shuffle. Here, people are friendly and want to work with you. It’s a family atmosphere and the clients enjoy that because they feel like they are part of the show rather than being number 1,269 out of 2,000.”

In addition to his share of the prize money and a monogrammed winner’s scrim from Mona’s Monograms, Syquia was presented with a Land Rover Experience Driving School off-road excursion by class sponsor, Eastern Hay.

Thursday’s $5,000 3’3” NEHJA Hunter Derby took place during World Championship Hunter Rider (WCHR) week at the Vermont Summer Festival. The United States Hunter Jumper Association (USHJA) World Championship Hunter Rider Program was founded in 1992 to recognize and celebrate the hunter rider. WCHR Program Members qualify for national and regional awards by earning points at member events held across the country. The top-ranked riders come together each year to compete in the WCHR Finals at the Capital Challenge Horse Show, held this year from September 29 through October 8 in Upper Marlboro, MD.

Competition continues throughout the weekend at the Vermont Summer Festival, highlighted by the spectator-friendly $30,000 Otter Creek Grand Prix beginning at 1 p.m. on Saturday, July 22.

For over 20 years, the Vermont Summer Festival has attracted exhibitors and their families to the Manchester region in southern Vermont for great competition in an ideal summer setting. Offering more than $750,000 in prize money over the course of its six-week run, the Vermont Summer Festival is New England’s largest hunter/jumper competition as well as the state’s richest sporting event based on purse. Outside the show ring, exhibitors are immersed in the charm of Vermont’s shopping, dining, and outdoor activities.

For more information on the Vermont Summer Festival, please e-mail or visit www.vt-summerfestival.com.