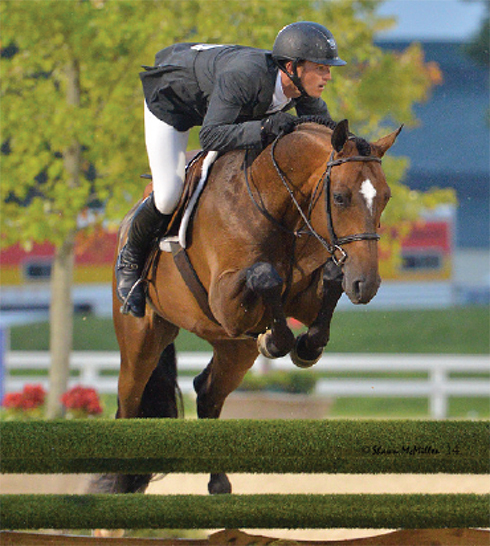 When Phoebe Weseley won the WIHS Adult Hunter Finals on ‘Just Ask Me’ in 2010, and had continued success in that division, she was ready to move up. A new 3’3” Amateur-Owner Division would be underway in 2012, so she set out to find a new hunter. The search started, as many do, in Florida to no avail. Later that spring, Phoebe’s veterinarian Dr. Tiffany Marr showed her a video of a gorgeous five-year-old stallion from Germany. He not only looked the part, he seemed to have the talent and scope to do the increasingly popular Hunter Derbies.

And so the unbelievable story of Coco began. Dr. Marr reviewed the X-rays, gave a thumbs up and Phoebe decided to purchase the horse, who had been gelded the month before. The day she wired the money, Dr. Marr called.

“She said she made an executive decision to not send him. He was swollen in the groin. So we gave him antibiotics and waited,” Phoebe explained. “Of course I had already wired the money!”

The saga continued. He arrived in quarantine and two days later spiked a fever. So Dr. Marr had him sent to Mid-Atlantic Equine Medical Center, where he had to have a surgical procedure due to a castration gone bad.

“I was a bit freaked out. Of course I said okay, what else could I do?” At this point, Phoebe had not even seen the horse. “So I decided to go see him before the surgery. I spent several hours with him, giving him carrots. We bonded.

I thought that I should check in with my insurance company, Taylor Harris. They were fantastic, as always. Super supportive.”

After the surgeons removed a large abscess and sewed him up, Phoebe was relieved. However, during recovery, the poor horse herniated, the stitches popped open and his intestines were heading for the floor. “Luckily someone was there to catch them,” she remarked. “I was beside myself. I already loved the horse and had never ridden him. He was given a 50% chance of survival.”

Several days passed and Phoebe went to see her new horse, still without a name. Optimistic, she noted that he had on a belly band but from that point forward he looked fantastic. “He looked like he was ready to go the horse show. He was pawing the ground for his carrots. It was amazing. And I thought ‘Wow. This horse is tough. He’s going to make it.’”

Soon afterwards, Answer Me This (known as Coco in the barn) came home. The strong-willed wonder settled in and was ready to show as a six-year-old in Florida the next winter. When he turned seven, Phoebe and Coco met up with Brady Mitchell, who had been looking for a Derby mount. Peter Pletcher had been showing him, but Peter had hurt his back. Brady took him in his first Derby and was 6th.

The rest is hunter history. Coco has a fabulous jump and continues to bring home top prizes in the Amateur classes, with Phoebe in the irons, as well as the Second Years and the Derbies, with Brady Mitchell aboard, from Old Salem to Upperville. 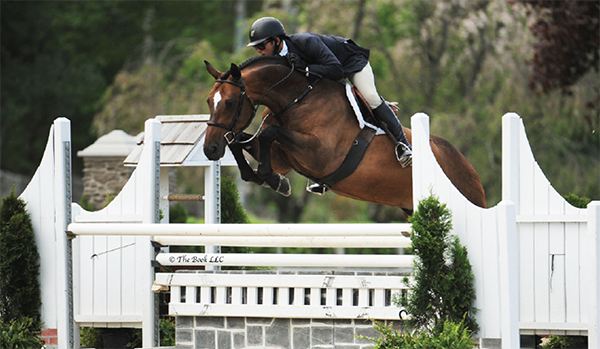 Answer Me This, Photo © The Book LLC

“This year I won at Old Salem in the 3’3” Amateurs. Also at Upperville Coco was 4th, in the Paul & Eve Go-As-You-Please Handy Hunter, under the trees, where you choose your own handy track. It was a really fun class,” Phoebe reported. “Brady and Coco are a great team. They love the Handy, Brady is gutsy and Coco is super brave.”

He takes supplements to help his stomach but has never had another incident. Phoebe calls him her ox. Currently preparing to compete in the USHJA International Hunter Derby Championship this August, Answer Me This is going places.